A Celebration Every September

'Armata' is a celebration that takes place every September. It is to mark the battle in the strait between Spetses Island and Kosta during the revolution of 1821. A few weeks before the festival starts, local boatbuilders set to work making a wooden boat which will be used as an effigy of a Turkish boat in 1821. The Turkish boat is constructed in the old harbour a week before the festival.

The festival week starts on the Monday and usually offers a full programme, including adult and children's theatre, local Greek dance, music and shows. The grand finalé is on the Saturday night, closest to the 8th September. This starts at about 9pm with dance and music - usually a popular Greek singer or a famous band who have been especially invited for the occasion. (The great Greek singer, Alkistis Protopsalti, was the first big name to headline the Armata in 2004).

Meanwhile, local boats make their candlelit way, very slowly, out towards the middle of the sea, off the Poseidonion jetty. They travel from both sides meeting in the middle, where the locally made 'Turkish' boat sits bobbing on the water, awaiting its demise! At about 11pm, when all the boats are in position, the commentary in Greek outlining the history of the battle of 1821 begins. Everyone listens and waits in suspense, as the story reaches its climax and the music reaches a crescendo and a small fishing boat approaches the 'Turkish' boat. Within seconds it bursts into flames and fireworks pour out from within and people scream with delight. 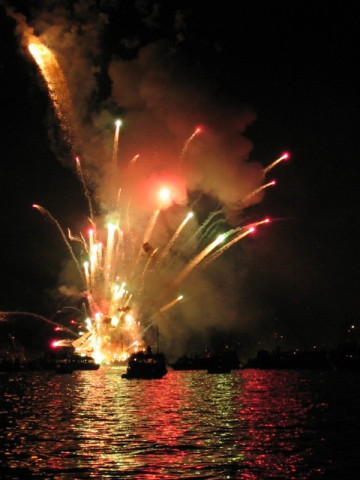 This is quickly followed by an enormous firework display with more music which has been especially selected to be played in perfect precision with each exploding firework. With loud "Ooooooh's and Aaaaaah's" the crowd watches,quite spellbound, as each blaze of colour is bigger and better than the last. A final array is lit along the Dapia jetty, sometimes spelling out the words 'Armata Spetses' or just boasting a row of sky high rockets. 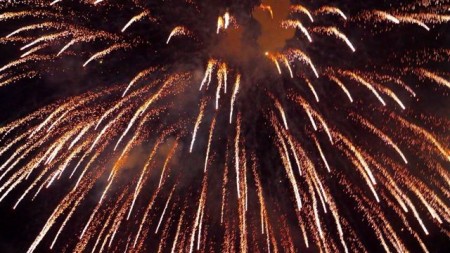 Then with much clapping from the crowd, another Armata comes to a close and the thousands of people who have all been transfixed for this hour, start to make their way from the seafront. Stretching from the Poseidonion to Ayios Mamas, people weave their way back to their houses or holiday accommodation or to their various modes of transport that are waiting to whisk them away. Thousands of people all bursting with praise for the spectacle they have just witnessed. Many of these too, will wind their way back through to the town centre and the old harbour for more night time adventures - after all, the bars and clubs are just opening and the night is young!