Many artists have lived and worked in Spetses over the years and some continue to do so. There are also many visiting artists who exhibit on a yearly basis. There is a gallery in the old harbour hosting different exhibitions throughout the summer months. Other spaces, such as Orloff in the old harbour, also regularly show works from local and visiting artists, with special opening nights when the artist attends. 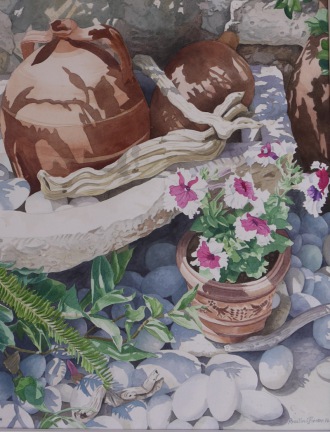 Rosalind Forster's work has been frequently exhibited in England as well as in Australia and Greece. She has been living and working on the Greek island of Spetses for 8 months of the year since 1989. This is when she met her husband, whilst painting a commission for a holiday company, on the island. The rest of the year is spent in Derbyshire, where she has her printing workshop.

Rosalind's watercolours of detailed and intricate sunlit still lives, often use favourite objects such as jugs, lace and shells. Her English subjects are more often commissioned famous gardens, such as Chatsworth, houses and interiors. Her linocuts are produced using the reduction method from one piece of lino, printing up to 16 colours; from studies of sunlit doorways, olive trees and still lives of Spetses Island, Greece. She now has a large portfolio of prints.

James Foot was born in 1960 and grew up in Cornwall and Dorset. He has collaborated with a number of other artists on a range of projects including joint exhibitions with photographer & film-maker Phil Maxwell and theatre/writing/art projects with actress/writer Eileen Pollock.

twice yearly, week-long, residential watercolour workshops.
He travels extensively to exhibit and paint and is an avid gardener and swimmer.
He is currently writing his first novel.

James used to live in Spetses in the 1980's and has continued to visit and exhibit on the island ever since.