There are two museums on Spetses - Hatziyiannis-Mexis, known as the Spetses Museum and Bouboulina Museum. Both are located in Spetses town.

This Spetses museum was once the home of Hatziyiannis Mexis, who was one of the leading Spetsiot shipowners in the late 18th century. It was built between 1795 and 1798, and high walls were constructed around the mansion. The mansion itself has Moorish and Venetian influences.

In the entrance on the right, is a large anchor, possibly from an Ottoman ship and brought up from the sea by the lighthouse. In the stone courtyard are many marble busts - the most impressive one of Hatziyiannis Mexis and the others being of naval commanders of the War of Independence. There is also the old baker's oven, with a small room where the dough was kneaded, an underground cistern and walled garden.

Inside there are many interesting portraits and photographs, including a Venetian map of Spetses (it is thought) dating from 1580. There are various rooms dedicated to important Spetses' figures, including Eleni Altamura, the Spetsiot artist from the last century. Also the Lazarou family, who changed their name to Orlov, in memory of the Russian admiral whom they supported in the 1770 Orlov Uprising. There are many forms of weapons on show, including sabres and pistols used in 1821. As well as a room dedicated to the Hatziyiannis Mexis family, there is another housing a large safe, which shows how wealthy the family was at that time.

The kitchen has an 18th century oven and shows examples of copper, earthenware and glass utensils once used on the island and other rooms include many artifacts such as: painted wooden figureheads of the famous ships from the Revolution; paintings of Laskarina Bouboulina; examples of costumes and fabrics; ceramics from the Far East; European china; Byzantine art; ecclesiastical items; archaeological finds and valuable documents and logbooks from Admirals which are all held in the museums library and archives.

The view of the town from the top terrace is good. The view of the straits beyond, in both directions, would have proved to be invaluable for the early sightings of suspicious vessels. 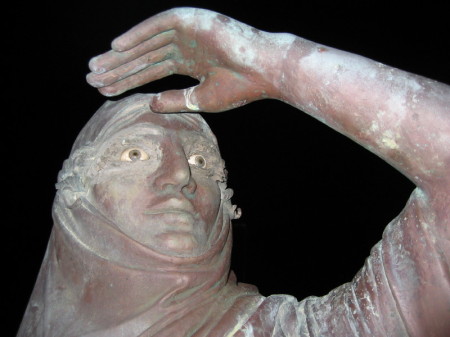 At the museum, during a forty-minute tour, you will hear the story of the legendary Bouboulina, from her birth inside the prisons of Constantinople, to her untimely and tragic death. Learn about her actions during the 1821 revolutionary fight for freedom, including her contributions to and sacrifices for her country.

You will see collections of weapons, old books, fine porcelain, portraits and engravings of the heroine, her personal belongings, documents and letters from the Revolution, paintings, a scale model of the flagship Agamemnon, maps, embroidery, Byzantine icons, furniture and artifacts from the 17th to the 20th century, plus the magnificent carved Florentine ceiling in the grand salon.

Tours begin at exactly the times shown on the display boards situated outside the museum and in the Dapia harbour.