wod truly love to have contact with peoe who were in Spetses 1974 1975 19771978 1980 . I worked at KARNAYO .. OLD Bar and the extremely posh restaraunt TROCADERO. . Nik Maraslis a photograph had a funky house underneath the restaraunt. American couple Doug and Janice had a bar ( opp end) with Vangelis and Barbara. Yiannis and bro Illios(?) owned/ managed the KARNAYO. Frank owned The OLD Bar . Great beach front cafe owned by Susan and George . Andreas the shoemaker. So ma y beautiful times and memories . Would love to hear from Cerys Dady , Sabine, the 2 Martins, great gorgeous Isralie bloke with a beautiful voice and sang with Colin , Scottish guy. Going back this year 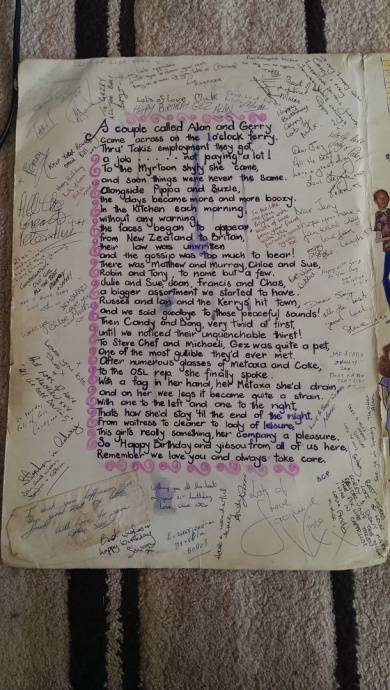 Spetses memories.what great times and lovely friends from the uk, Australia and new Zealand, and even Birmingham lol, yes rob, "cmon you villa" some brilliant laughs working in mikaelis`s laundry in the myrtoon. hope everyone is well. take care, back in the day it was alan and Gerry, from brighton, loved seeing all the old names and friends on here. been back there once, still love the place. and I have a collective  picture of every worker, and loads of our greek friends of the time, will post on here if I can.

Please see 'Spetses Work Crew Card' above and 'The Crew' below.

Hi Keri & Keri . You may not remember me . I was on the island in 81 and again in 82. I was 17 the first time I arrived on the Island and spent most of my time pretty dam drunk. ( as they said about the 60's if you remember them you wern't there ) . During a particularly poor time i spent some weeks on the floor of the appartment you all shared , I think NIkki talked you all into letting me stay as she felt sorry for me. I returned to the UK in the April of 83 having spent the whole winter on the Island and sorted out my life .I have been married for the last 25 years and have 4 children and 2 grandchildren. My two youngest are 16 & 17 and my eldest daughter 24 , my stepson is 35 . It would be nice to hear from you or anyone else that remembers me and or the island of course which i found spellbinding. If you ever have any contact with Nikki give her my warmest regards as I often think of her and the kindness she showed me. All the best David Ede davidede@kljgroup.co.uk

Yes i remember you both very well. I used to work for Takis in the laundry at the Myrtoon Horel, remember old Mikalis?? I live in Greece and met Gail last summer, who was a good friend of Liz, but she is living in the UK now. Have got some photo's of that great time on Spetses (if i can find them) will post them on the site.

coming back to spetses
LIVED IN SPETSES 1982 AND 1983. WORKED FOR TAKI TOURIST OFFICE. KERRI HOGAN (BLACK KERRI) KERRIE MOLLINEAUX (BLOND KERRI) AND PIP JACK WE ARE ALL HEADING BACK IN AUG. 20 2008 WITH OUR FAMILIES FOR TWO WEEKS. WOULD LOVE TO CATCH UP WITH FRIENDS STILL ON THE ISLAND AND ALSO PEOPLE WE WORKED FOR. WOULD LOVE TO SEE LIZ AND DAWN BOTH FROM ENGLAND BUT HEARD THAT THEY MARRIED AND STAYED ON SPETSES. IS YANNI THE BUGGY DRIVER AROUND

coming back to spetses...

in 1982 and 1983 i lived and worked in spetses with pip jack and kerri mollineau known as blond kerri and myself kerri horton known as black kerri, we are all coming back to spetses on 20th august 2008 with our families and would love to catch up with any friends or workmates still on the island. would love to see liz dawn from england who married and stayed on the island.we all worked for taki at the tourist office and i worked in the clock sqaure washing up in a resturant.

I have been to spetses on more than 6 different occasions,however my last visit was over twenty years ago,,i was one of the first people to go to the island,,noone used to send anyone to spetses as it was to hard to get too,i love that litle island it holds so many happy memories,,,it used to have a disco called the delphinia,,,i was always recognised by the people their and have photoes that i will post on here,ill show you how it was when it was first made into a holiday island,,,after going back so many times i realised it was never going to be the same island it was when i first visited,,,it had changed so much ,i bet i would not recognise it if i went today,,i loved the horse drawn carts,,the men used to let me steer them on the way home,,had many a meal up in the mountain with the locals,,i loved this beautiful island and when i look back at the pictures today it make me smile and smile xxx happy days xxxxxxxxxxxxxxxxxxxxxxxxxxxxxxxxxxxxx

We spent our honeymoon on Spetses in early June 1984, it seems a lot of us visited in that year. It's our silver wedding anniversary next year and we are looking to return for a nostalgic look. During our visit we became very friendly with the local Post Master named Andreas - does anyone know of his current whereabouts?