Old Traditions Blend with the New

Christmas in Greece has changed. Although it will never replace the Easter celebrations on the importance scale, it has become a special time of the year for most Greeks and is certainly celebrated as such. In most towns and cities there are fine street decorations and Syntagma Square in Athens, now boasts the largest Christmas tree in Europe.

In Spetses, each year at Christmas, there was once a large decorated boat in the Dapia to celebrate St. Nicholas, whose name day is on the 6th December. This has now been replaced by a huge Christmas tree and large crib and the whole area is ablaze with light.

There are also other decorations, including the Three Kings with camel at Ayios Mamas beach and on the corner of the wall at Ayios Mamas an electric blue Christmas tree which shines out like a beacon across the waves. Trees along the inland road to Ayia Marina and the old harbout are adorned with trailing lights and houses everywhere seem to sport gawdy decorations and messages of 'KAΛA XPIΣTOYENNA' - HAPPY CHRISTMAS!

A new Spetses Christmas event on the Christmas calendar, is the local primary school's parent association's ('Δημοτικό Σχολείο Σύλλογος Γονέων') bazaar, during the second week of December. This takes the form of a little Christmas village, behind the Dapia, where the parents and school children sell all kinds of homemade produce ranging from very well made decorations to cakes, biscuits and savoury foods. Father Christmas and his elves are usually based in one of the houses and the whole event runs for a few days and usually raises a tidy amount for the school.

There are many Greek Christmas traditions which vary slightly from the rest of Europe, one being the Christmas Eve morning singing of the 'Kalenda'. Children set out early alone, in pairs or small groups, with their triangles (sometimes, small wooden drums too) knocking on doors of family, friends and shops. They will firstly ask permission to sing and if invited in (almost always!) will sing the Christmas Kalenda by the Christmas tree with great gusto waiting patiently at the end, as the person inside rustles around for some coins (or indeed some paper money!). This ritual is repeated on the morning of New Year's eve too, although a different 'Kalenda' is sung. 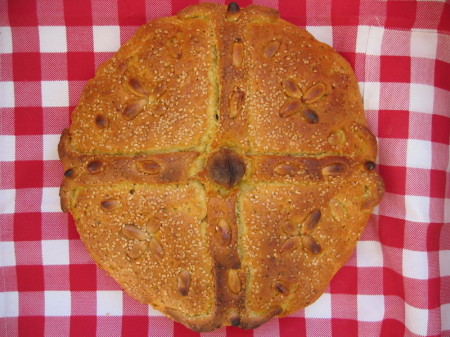 Christmas and the New Year is a time for feasting too and many sweet cakes and biscuits are prepared in the days beforehand. These include sugar cookies, known as 'kourabiedies' and honey cookies, known as 'melomakarona'. Also a special Christmas bread will be made, called 'Christopsomo', meaning Christ's Bread, which is large and sweet and decorated before baking. A New Year cake called 'Vassilopita' is baked. When being made, a coin, wrapped in foil paper, will be put in the mixture and is known as a 'flouri'. When cut on New Year's day, it will be divided in to named pieces. One for each member of the family, one for the house and one for the business and one for the holy spirit. Whoever finds the 'flouri' in their slice, will have good luck for the whole year. Lamb or pork will be roated in the oven on Christmas day and New Year's day and there will be much celebrating on New Year's Eve with fireworks and guns being blasted in to the air to mark midnight.

The special name days over this period are: Manolis (Emanuel/Emanuela) or Manos, as is the abbreviation, on Christmas day and Vassilis (Billy) on New Year's day. This is why the cake is called 'Vassilopita'. It means the cake of Vassilis. There will be much partying at these households and friends and family will drop by all through the day to wish them all a  'ΧΡΟΝΙΑ ΠΟΛΛΑ' - Many Happy Returns!